E-waste is commonly known as electronics that are nearing the end of their useful life, and must be recycled or thrown out. In 2020, the United States produced 6.92 million tons of e-waste. Yet when we consider what we throw out, we rarely account for our expensive and hyper-complex devices.

Ok, technology exists and it has a finite lifespan. Why should you care?

E-waste is emerging as a much more common form of waste. According to the United States Environmental Protection Agency, American households use, on average, more than 28 electronic devices.

As both our population and thirst for technology increases, U.S. generation of electronics has increased by more than 800 thousand tons since the year 2000, and our rate of recycling is struggling to keep up.

You might think that 6.92 million tons of e-waste sure seems like a lot, but how much can it really matter when compared to the approximately 300 million total tons of waste produced every year by the United States?

The answer is: a lot.

E-waste makes up about 2 percent of what is dumped in landfills, but 70 percent of the toxic waste. Components of this waste include lead, mercury, and barium, which are very toxic and non-biodegradable.

Recycling electronics safely and professionally is a prominent political issue. More than 50 percent of e-waste is shipped from the United States and Europe to countries such as the Philippines, China, India, and Pakistan. Then, workers attempt to recover precious metals like gold, silver, and platinum.

Methods such as open-air burning and acid baths, aside from being highly hazardous to workers, also harm humans in nearby areas. According to one study, children in the Southeastern Chinese city of Guiyu (known for being an e-waste recycling hub) experience an average Blood Lead Level (BLL) of 15.3 μg/dL, 10 times what is considered ordinary for children. Needless to say, this has serious health consequences. 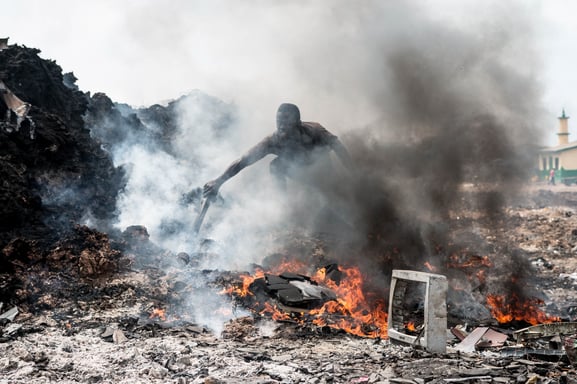 Unfortunately, our irresponsibility in the way we dispose of electronics affects the livelihood of people all across the world, often much more than our own. So what can we do? Avoiding waste and pollution by ramping down our dependence on electronics is a noble but improbable idea, as Americans are more attached to our devices than ever before.

Therefore, we are left with two solutions:

How to (Safely) Dispose of Old Electronics

What to Do with Old Electronics Electronic devices like smartphones, TVs, tablets, and laptops provide endless entertain...

How to Make Use of Your Unupgradable, Old Laptop

If you compare your recent laptops to the ones you had five years ago, you will find a lot of differences in their hardw...

Bitcoin and the Environment: A Q&A with Vijay Boyapati

What is Bitcoin's impact on the environment? If you've been reading the news, you've probably heard all sorts of doom-an...